According to a new study on housing affordability the combination of stagnant wage growth and accelerated rent growth is likely going to result in an increase in households that spend more than 50% of their incomes on rent. From a story in Bloomberg News:

The number of U.S. households that spend at least half their income on rent—the “severely cost-burdened,” in the lingo of housing experts—could increase 25 percent to 14.8 million over the next decade. More than 1 million households headed by Hispanics and more than 1 million headed by the elderly could pass into those ranks. Households shouldn’t spend more than 30 percent of income on housing, by the general rule of thumb…

There were 11.2 million severely burdened renter households in 2013, competing for 7.3 million units affordable to them, the report said. If rents continue to rise faster than wages, the number of households spending more than half their income on rent will rise, too. Wages grew 0.2 percent in the second quarter of this year, the slowest pace since 1982.

“The economy alone is not going to solve this problem,” said Andrew Jakabovics, senior director of research at Enterprise Community Partners, in a conference call to discuss the findings. “It brings us back to the need to expand affordable housing,” 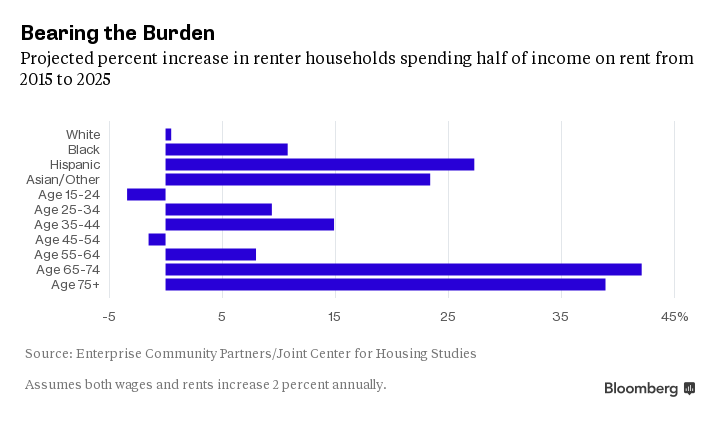