Nancy Burke, VP of Government & Community Affairs at the Colorado Apartment Association, wrote an article for the Colorado Real Estate Journal that summarizes the challenges faced by the multifamily industry in terms of developing affordable housing and offers a nice overview of the many different approaches being taken around the country to address the ever-increasing demand for affordable housing solutions. Here’s a taste:

Thirty-two percent of multifamily construction cost is from regulation. The National Association of Home Builders and NMHC states regulation imposed by government accounts for an average of 32.1 percent of multifamily construction costs. Building codes, development requirements, impact fees, inspections and other fees contribute to this highly regulated industry, which translates into higher rents and reduced affordability.

Lack of labor, land prices and costs of materials have increased over 30 percent in the past two years. The not-in-my-backyard movement and moratoriums placed on multifamily construction equate to millions of dollars in legal fees and slows the time for units to reach the market. Blocking new development doesn’t keep people from moving in, but it usually prices people out of the neighborhood. Building more lessens the likelihood of displacement and gentrification…

The U.S. Department of Housing and Urban Development created a “landlord task force” to look at incentives and reduce regulatory requirements in the complicated process of offering housing choice vouchers. Onboarding each renter costs nearly $1,300.

Minneapolis incentivizes landlords to retain a 40 percent tax abatement if 20 percent of the units are set aside for 60 percent area median income or less, for a 10-year term.

New Orleans is constructing a co-living roommate model arrangement in a multifamily building near downtown. It features furnished rooms, paper products and house cleaning for under $1,300 per month. Management is working with AirBnB to allow residents to rent their rooms and retain 75 percent of the proceeds…

Denver is a point of reference in affordable housing solutions, too. City Council recently adopted the Lower Income Voucher Equity Denver program, the first-of-its-kind, public-private partnership highlighting an integrated, transitional, two-year affordable housing model that is being considered in other cities. It is designed for working citizens earning $23,000 to $67,000 (40 to 80 percent AMI) that leverages employer and foundation support to buy down rents. 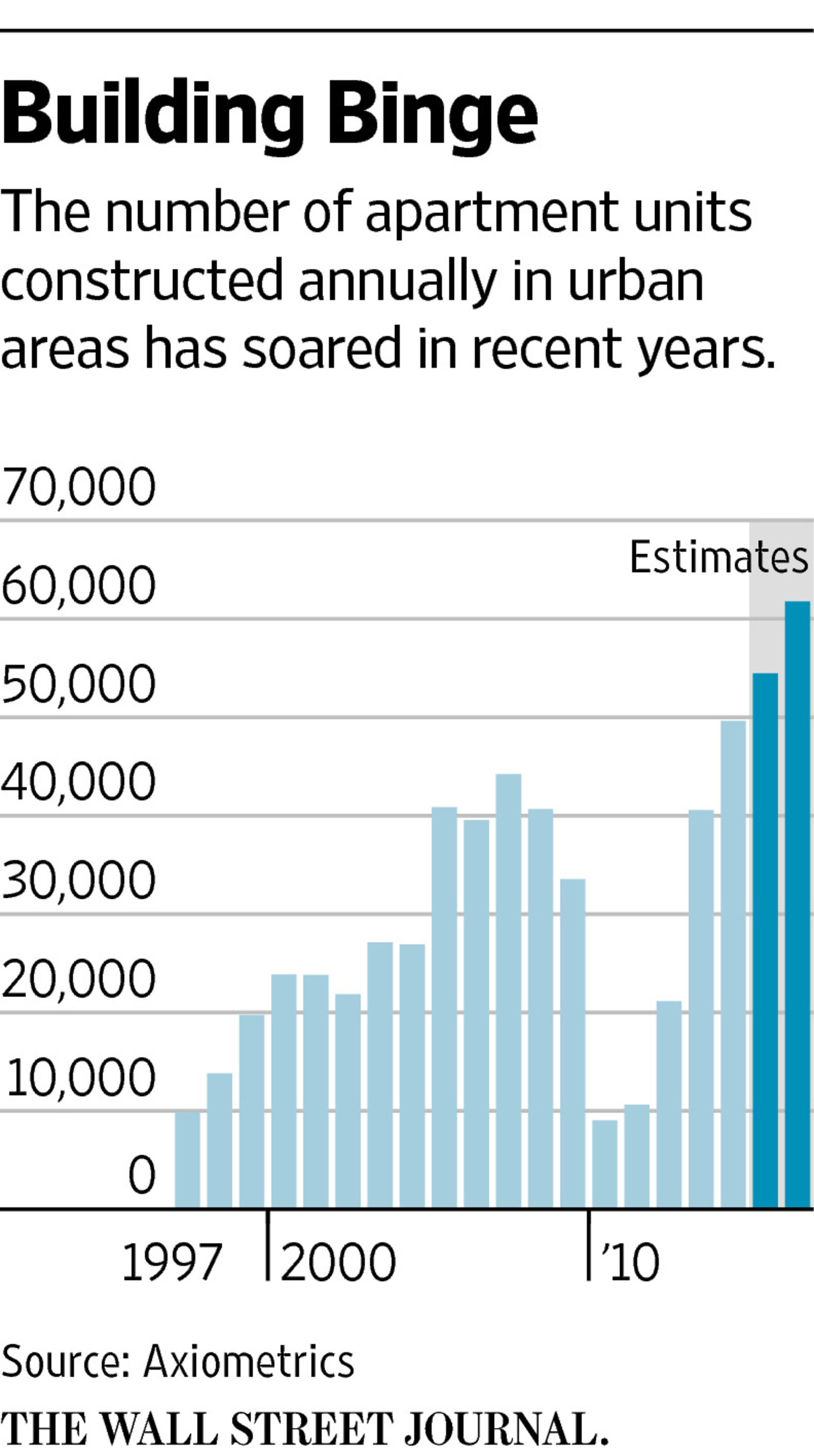 Toll Brothers and Lennar, two of the largest US home builders, are digging deeper into apartment development:

Upscale builder Toll Brothers Inc. has said it intends to expand its apartment-development division, a three-year-old venture that so far has focused on the Boston-to-Washington, D.C., corridor, to build projects across the U.S. In all, Toll plans to double its equity investment in the division to up to $300 million.

Rival Lennar Corp. in July said it has recruited sovereign-wealth funds and institutional investors to create a $1.1 billion fund for building and holding apartments in up to 25 major U.S. markets. Lennar, which will build the fund’s apartments, intends to expand the fund’s equity to $2 billion within a year, executives said.

The apartment market has been a boon for developers and investors so far this decade. Vacancies are hovering near 15-year lows at 4.2%, according to market-research firm Reis Inc., as young adults stay in rentals longer than earlier generations did. Meanwhile, apartment asking rents have steadily risen to a 15-year-high of $1,194 a month in 79 U.S. markets in the second quarter, according to Reis.

“Today we see great fundamentals in the business,” said Rick Beckwitt, Lennar’s president, in an interview. “You have 3 million-plus young adults living at home who want housing, and most of them will rent.”

Other researchers quoted in the article are less optimistic about how long the apartment party might go on, but the fundamentals continue to look strong and it appears that the party isn’t set to end any time in the immediate future.

Allen Morris Residential has decided to build a community that attracts both Millennials and Baby Boomers:

When W. Allen Morris was planning a new apartment community, he knew he wanted to cast a wide net to appeal to both Baby Boomer and Millennial renters.

So, he took a look at his own family and decided to build a place where they would all feel welcome. The 62-year old Morris surveyed his six children, who range in age from 23 to 32, to find common ground between his Baby Boomer values and their Millennial and Gen Y expectations…

“The idea is not to target a specific age group but to design it for people that like art and fitness and other common interests,” he says. “It should attract a broad range of people.”

The proposed apartment project on the site of what is now Westside Apartments in Winston-Salem is a go after the developer closed on the land deal in September. From the Triad Business Journal:

Pennsylvania-based Vision Development Inc. is planning 171 apartments among two buildings, with parking decks in each building for a total of 317 spaces. The complex, which is known as “The Edge,” will be located along the 1600 block of West First Street at the site of the existing Westside apartments, which have been vacant since the spring.

The Forsyth County central submarket had just 98 vacant apartments in March 2013, but more than 1,000 units are proposed for the area, including the 243-unit Plant 64 project at 500 W. First St., the 170-unit Chatham Mill project on Chatham Road at Northwest Boulevard, and the 205-unit Brookstown apartment complex under way near the BB&T Ballpark on West First Street.

You’ve probably heard the saying that “misery loves company.”  Well, if misery loves company then success attracts company and according to the Wall Street Journal the recent strength of the apartment market is drawing in some large commercial property companies that haven’t traditionally been involved with apartments:

Fueled by the decline in home ownership, the boom in apartment building is attracting commercial-property companies such as Boston Properties Inc., Mack-Cali Realty Corp., SL Green Realty Corp.,Simon Property Group Inc. and MacerichCo. They all have either acquired, completed or broken ground on apartment buildings in recent months, or plan to do so next year.

The companies’ moves are helping fuel a boom in rental apartment development and investment. The Commerce Department said Tuesday that construction starts in the multifamily sector in November spurted 25.3% from the previous month. Single-family housing starts rose just 2.3%.

Many of the nation’s biggest office and retail developers are getting in the apartment game for the first time. For example, Macerich, a mall giant whose holdings include Scottsdale Fashion Square in Arizona and Queens Center, in New York, is building a 430-unit apartment tower at its Tysons Corner Mall in Virginia. The company says it also is exploring building apartment units at its Broadway Plaza mall in Walnut Creek, Calif.

As our members know managing apartments requires a unique skill set and that fact isn’t lost on some of the developers sticking their toes in apartment waters:

Apartments require a far different skill set than retail or offices. Turnover is high, so landlords constantly have to adjust prices to fill empty units. Tenants can easily be lured away by something newer, better located or offering more modern amenities. Landlords also have to worry about the economy worsening—plenty of apartment owners had to reduce rents after the financial crisis—and the for-sale market making a comeback.

Mr. Linde at Boston Properties said that because apartments aren’t the company’s expertise it has hired outside companies to be responsible for the leasing and day-to-day management of the properties. That will likely reduce profits, but the company won’t have to take on additional overhead, he pointed out.

Wells Fargo’s economic outlook for 2012 is posted on their website and they make some interesting observations, starting on page 5 of the report, about what they call “game changers” to the old economic framework:

From our viewpoint, three structural challenges in the domestic economy have limited the pace of economic growth in 2011 and are also likely to limit growth in the year ahead. In each case, the experience of this cycle is significantly different than in prior cycles, implying that decision makers must adjust to the new rules of the game.

First, the Great Recession exposed the credit dependency for the American consumer, the U.S. federal government and European sovereigns. Over the past 30 years, the broadening of credit availability provided the means for many households to spend beyond their income earnings in the hope of paying off those debts out of future income. This ended with the Great Recession.

Second, expectations for continued home price appreciation, built upon the experiences of the post-WWII period, set the tone for the strategy to buy a home today in anticipation of capital gains down the road. This ended with the Great Recession.

Finally, state and local governments had also anticipated that future retiree benefits and health care, woefully underfunded in many states and localities, could be paid out of future tax revenues.  Well, we know how this ended.

They go on to explain the thinking behind their hypotheses and it’s well worth the read if you want some insight into why this economic recovery has been so different from past recoveries, and how that might impact business in the coming years.  Of particular note is their outlook on housing – they see 2012 looking like 2011 – and their assessment of the prospects for apartment development:

Apartment construction remains the lone, unambiguous bright spot, and the recovery in that market still has quite a ways to go. Vacancy rates for apartments have fallen 1.5 percentage points to 5.6 percent over the past year and rents have increased 2.1 percent. Construction activity began to rev back up during the second half of the year and is expected to rise further in 2012.  Development activity is still being constrained by concerns about sluggish job growth and credit availability. Sales remain strong, however, and the relatively high prices apartment communities are fetching should keep the development pipeline growing.